Cialis vs Viagra - A Head to Head Comparison 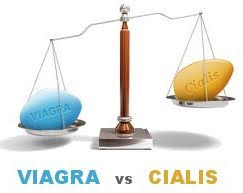 They are two of the most popular ED medications on the market today...but when it comes to Cialis vs Viagra which is the best choice for you?

Here we compare the two pills side by side to see which one comes out on top...

A Brief Overview of the Two Options

Let's start with Viagra, since it was the first one introduced.  The active ingredient, sildenafil citrate, was originally created by two Pfizer scientists, Peter Dunn and Albert Wood, back in 1989.  It was originally meant to be used for treating high blood pressure and angina chest pain.  However, testing and studies in the early 90's yielded poor results for treating heart disease.

All was not lost, however, as several trial participants reported experiencing increased erections.  Pfizer jumped on this opportunity and shifted their focus to erectile dysfunction...fast forward to March of 1998 and Viagra is approved for ED.  Although no longer at its peak, it accounted for over $1.5 billion in sales in 2016.

Cialis was the third ED medication to be introduced to the market (after Levitra) and was approved by the FDA over five years after Viagra,  in late 2003.  It contains a different active ingredient, called tadalafil, although it works in a very similar model.

Both drugs are of a class of medications called phosphodiesterase type 5, or PDE5 for short, and as such they both work in the same manner.  The drugs enhance the effect of nitric oxide (NO2), which relaxes the muscles inside the penis, facilitating blood flow and in turn an erection.

Cialis and Viagra - Side by Side Overview

Which is the best option?

Looking at Cialis vs Viagra, it's quite obvious that Cialis seems to be a better option for many reasons.

For starters, it's less expensive than Viagra, which is always a good thing.  It's also a lower dosage of medication, which is better for your health.  You can take Cialis 30 minutes before sexual activity, as opposed to one hour before for Viagra.  So the spontaneity issue is better served with Cialis.

Also, when it comes to Cialis vs Viagra, Cialis lasts much longer, remaining in your system up to 36 hours, as opposed to just 6 hours.  That's why they call Cialis more of a weekend pill.

As far as side effects, Cialis appears to have fewer common side effects, although the less common, more serious ones are about the same, including priapism and vision/hearing issues.

Are there any advantages to Viagra?  Not too many it seems.  It has been around longer and there have been more studies conducted, so you can argue that it is more proven.  It does have that first to market advantage as well.  But studies show that most people actually prefer Cialis due to the fact that it lasts longer.

One of the reasons why you might choose Viagra vs Cialis is due to the fact that Cialis stays in your system longer, and although that sounds like a benefit, it gives it more time to interact with other medications you may be taking.

It's interesting to note that both medications will be coming off patent shortly.  An Israeli company called Teva Phamaceuticals, one of the world's largest generics manufacturers,  has reached an agreement with Pfizer to launch a generic version of Viagra in late 2017.  A Cialis generic may be available as early as mid-2018.

So for a short period of time, Viagra, or rather the generic version sildenafil, will likely be a better option simply because it will be so much cheaper.  Yet when Cialis, or tadalafil, becomes available in 2018 it will again be the preferred choice.

What's the bottom line with Cialis vs Viagra?

Although Cialis certainly has Viagra beat in many categories, ultimately it comes down to personal choice.  Even though Cialis works faster and lasts longer, your doctor may still think Viagra is a better choice for you based on your medical history, current health and any medications you are taking.

So talk to your doctor about Cialis vs Viagra and together you can decide with ED treatment is the best option for you.