Uprima is a New Kind of Impotence Medication 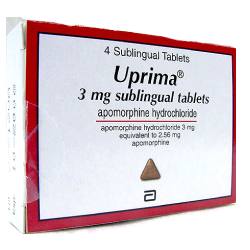 Uprima® (apomorphine hydrochloride) is the first in a new breed of impotence drugs.

It works by triggering an area of the brain known as the hypothalamus, which stimulates production of the brain chemical dopamine, believed to be partly responsible for initiating erections.

The more popular impotence medications, such as Viagra, Cialis and Levitra work a little differently, and are known as PDE-5 inhibitors. They work by relaxing the smooth muscles and blood vessels in the penis. This allows the blood vessels to fill with blood and produce a natural erection.

Although Uprima and the PDE-5 inhibitors produce the same end result, there are a number of differences in the medications besides their methods of action.

Uprima is a flavored oral medication that dissolves under the tongue, and therefore goes to work faster because it is absorbed directly into the bloodstream, bypassing the digestive system.

This means that it can start to take effect within five to seven minutes - almost three times faster than Viagra.

We compare Uprima to other impotence drugs in our comparison table, so you can decide which impotence treatment best suit your needs.

The majority of men who participated in early trials for Uprima reported a positive reaction within 15 minutes. In one study, over 60% of participants who had lived with impotence for many years said they experienced a vast improvement in sexual function and activity during the initial ten-week trial.

One of the major benefits is that it can be taken soon after a meal without reducing its effectiveness.

The active ingredient is a compound called apomorphine, which has been used for over a century to treat various medical conditions. It has been used to treat Parkinson's disease for the past thirty years.

Uprima is manufactured by TAP Pharmaceuticals and is currently available only in the UK and parts of Europe. At this stage there are no plans for the introduction of the drug in the US.

**LATEST UPDATE** It seems that Uprima never made it to the United States, and it may well no longer be available elsewhere. We haven't been able to find an official site or any new information on it. If you do decide that you want to try this, make sure you investigate further to see if it is even manufactured anymore. Generic apomorphine may be available, but make sure it is legitimate.

Are there any side effects?

There have been occasional reports of patients on the highest dosages who have experienced episodes of hypotension (low blood pressure).

If you experience any reactions after taking Uprima that cause you to feel unwell or dizzy, or if you have racing heartbeat or chest pain, cease sexual activity immediately and call your doctor.

Can I Buy Uprima Online?

Unfortunately Uprima is not available for sale as it is no longer being manufactured.  That might however be a good thing as it might have had too many concerning side effects to be approved.  In that regard you might be better off with one of the conventional medications.

If you would like to try one of the other impotence medications such as Viagra, Levitra and Cialis, you can find them online.