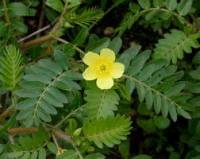 Tribulus terrestris extract has become an extremely popular natural treatment for ED over the last several years.  But what is it exactly and does it really help?

Tribulus is a plant in the caltrop family that originally grew in the tropical climates of the southern Hemisphere, including south Europe, Asia, Africa and Australia.

It has since become adaptable to other climates and is now considered an invasive species in North America, where it grows along roadways and in other wild areas.  It is known by many different names including bullhead, goat’s head, devil’s-thorn and puncture vine.

The last two names come directly from the hard, spiny “nutlets” that serve as a protective covering for the seeds of the plant.   While these thorny appendages are good for the seeds they are not as pleasant for bare feet or hands, in which they can become painfully embedded.

While this stickiness can be annoying, the plant itself has actually proven to be quite beneficial, having a multitude of medicinal properties.  Primary among these is its ability to balance the body’s natural level of testosterone, making it appealing to both bodybuilders, who often use TT after taking a cycle of steroids in order to restore depleted testosterone, and men suffering from ED, or erectile dysfunction.

For generations, the fruit, leaf and root of Tribulus Terrestris have been used in homeopathic medicine.  A powdered extract is used in Ayurvedic, Unani and Chinese medicine to improve strength and aid in reproductive functions.  It is also believed to treat kidney, bladder and urinary tract infection and is known to act as a diuretic.   Other connections have been made to its use as a treatment for heart problems such as angina as well as infertility.

Once scientists were able to identify and extract its active ingredient, protodioscin, it was able to be used in supplement form as a direct treatment for ED.  In recent years, nine different studies have been conducted in order to determine the herb’s benefits in treating ED.  The studies determined that the protodioscin in Tribulus Terrestris acts as a precursor to the body’s natural supply of testosterone and other hormones, and can be spontaneously converted by the body’s own enzymes to replenish diminished testosterone levels.

Still other studies link Tribulus Terrestris to DHEA, a substance that occurs naturally in the body and helps to maintain a healthy sex drive.  All of which has helped to make this herb one of the more sought after natural treatments for all forms of sexual dysfunction including ED.

Our take on tribulus terrestris for ED

While all of these studies offer a great deal of hope, there is still no clinical evidence that can help doctors to determine a safe dosage.  In most cases, a dose of 85-250 milligrams daily is recommended.  Though there are many types of Tribulus Terrestris extract on the market today, in order get the most effect, it is necessary to ensure that any supplement you use contains at least 45% of the active ingredient protodioscin.

As with any form of medication, natural or otherwise, there are always potential side effects.  In the case of Tribulus Terrestris these can include trouble sleeping, prostate problems in men and menstrual irregularities in women.  All of these have only been seen after long term use and using a TT supplement for a short period is generally considered safe.

At any rate, you should definitely talk to your doctor before taking tribulus terrestris for ED or any other purpose.  Make sure it doesn't interact with any other supplements or medications you may be taking.