How Maca Can Help Your ED 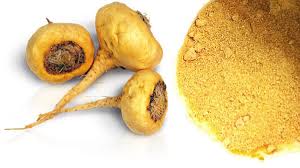 Along with ginseng, deer velvet, yohimbe and others, maca root is showing some promise in the treatment of erectile dysfunction.  Recent studies have shown it to be quite effective in remedying the symptoms of impotence in men.

What is Maca Root?

Maca is an herbaceous food plant that is widely used in South America, but not commonly known in North America. It is native to the Andes Mountains in Peru. The root is the primary part of the plant that is used, and it has long been considered a super food. It is considered an adaptogenic herb, which means that it balances the body.

Maca is used to provide energy, reduce stress and help to balance hormones. It provides the "pick me up" of coffee without the jitters or nervousness. It is most often used in powdered form. Many people routinely add the powder to smoothies, granola or tea to increase energy throughout the day.

How Can Maca Root Help With Impotence?

In recent years, several studies have shown that Maca root can be an effective remedy for men with ED, particularly for those that suffer mild symptoms of the condition.

A study in Italy treated 50 men with mild ED symptoms for 12 weeks. One group received 2400 mg of dry maca extract each day, while the other group received a placebo.

However, what is really remarkable about this study is that the men receiving the maca treatment had significantly increased erectile performance scores, both over their scores before the study began and over the scores of the men in the placebo group, illustrating a connection between treatment with maca and improved performance.

Other studies have shown similar results, including results that indicated that men had increased libido, in addition to increased ability to perform.

Where Can You Purchase Maca?

Maca is a very popular natural treatment for ED as well as numerous other conditions, and as such is easy to find in powder form at herbal and naturopathic shops. 2400 mg is the standard dosage per day.

Because it does provide increased energy, it is best to take it early in the day to prevent it interfering with sleep. The powder has a pleasant taste, and tastes especially good with chocolate. Most people take it mixed into a drink or smoothie.

If you're having mild to moderate ED symptoms, maca may be a great alternative to resorting to harsh medications or procedures. It has not been shown to have harmful side effects, and is a gentle way to treat impotence symptoms. It may the little boost needed to make a big difference in your sex life.